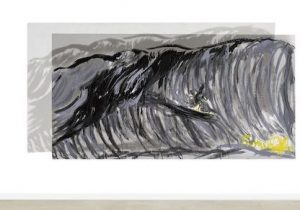 Raymond Pettibon rose to prominence after producing album art for Sonic Youth, Foo Fighters, and his brother’s band, Black Flag. Pettibon wears his influences on his sleeve, referencing pop culture and his California upbringing with little concern for appearing derivative. Bonhams’ upcoming Post-War & Contemporary Art sale will feature an untitled piece by Raymond Pettibon depicting a surfer. Having spent much of his childhood near Venice Beach, surfing plays a major role in Pettibon’s work. This particular acrylic on plexiglass piece shows a surfer getting his bearings inside the tube of a large wave.

Also heavily influenced by pop culture was Pop artist Mel Ramos. This sale includes a portrait from Ramos depicting Academy Award-nominated actress Ali MacGraw. Ramos was particularly known for juxtaposing nude figures with the most popular products of his day, from Baby Ruth candy bars to Coca Cola. With MacGraw, though, Ramos takes a more conservative approach. He dresses MacGraw in a black top balanced by a white and blue choker.

Another featured work comes from graffiti and studio artist RETNA, titled Blackstone Camo. The script on this and many of RETNA’s other works is a language all its own, inspired by hieroglyphics and Native American pictographs. Also influencing this piece is another RETNA project, in which the artist turned an abandoned Douglas DC-3 airplane in the Arizona desert into an art installation. Those interested in this or any other lot can register to bid on Bonhams’ website.