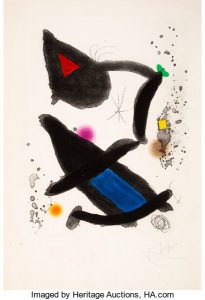 The Prints & Multiples auction, offered by Heritage Auctions, is anchored by several well-known artists, including pieces by Melvin John Ramos. Ramos was an American figurative painter who specialized in female nudes, often emerging from or resting on unusual objects such as a candy bar wrapper, a Titleist golf ball, or a banana split. Among his pieces featured in this event is “Caramello Caramio”.

Another artist with several works up for bid is Shepard Fairey. Fairey is an American contemporary street artist, graphic designer, activist, and illustrator. Though already a well-established artist at the time, he became more broadly known to the public as the designer of the Barack Obama “Hope” poster for the 2008 U.S. presidential campaign. His work is best represented in this auction with “Crowd 2” and “Film Strip”.

The third artist with quite a number of works represented is surrealist painter Salvador Dalí. Dalí worked extensively in etchings and lithographs, as can be seen by the work in this sale, and his prints are often considered to be equal in quality to his paintings. Other well-known artists with works under the gavel include Pablo Picasso, Frank Stella, Joan Miró, Marc Chagall, Banksy, and more. View any of these lots and register to bid on Heritage Auctions.