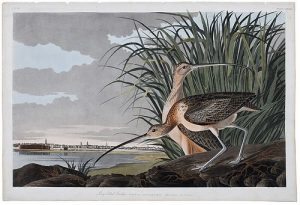 Milton Avery was noted for his use of lyrical color in paintings of landscapes, figures, and still lifes. A New York native, he was a central figure of the 20th-century American art scene who did not seek to categorize his work. Avery often claimed, “I never have any rules to follow… I follow myself.” One of his landscape paintings titled Birds Over Sea is featured in Brunk Auctions’ upcoming sale. Birds Over Sea was completed in the later years of his career. In the available work from 1957, the artist took inspiration from the scenery around him.

Another work highlighted in the auction is a hand-colored etching from John James Audubon. One of the most celebrated American natural history artists, Audubon began his journey through America’s wilderness in the late 19th century. After that, the artist produced over 400 depictions of North American birds. Interested collectors can find 394 lots in this event, including a 1791 chart of Nantucket from Paul Pinkham and a cut glass bowl from J. Hoare. To view more and to place a bid, visit Bidsquare.