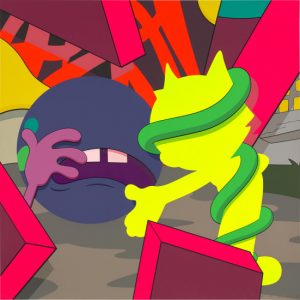 When 25-year-old Richard Hambleton moved to New York from his native Vancouver, he quickly made a name in the street art scene alongside artists such as Keith Haring and Jean-Michel Basquiat. Soon, Hambleton gained popularity for his life-sized figures of Shadowman. True to their name, these works show a silhouetted image of a mysterious figure. These “shadow paintings” were splashed and brushed with black paint on hundreds of buildings across New York City. At the top of the upcoming auction, presented by Phillips, is a Shadowman painting from Hambleton. Executed in 2005, the work shows a silhouetted image of a horse and rider on the reddish-black background.

Also highlighted is a multi-layered painting by José Parlá, best known for his public installations and large scale paintings. This 2014 piece, titled February Days, was inspired by urban landscapes and showcases Parlá’s calligraphic and graffiti techniques. A screenprint by KAWS can also be found in this auction. Drawing inspiration from pop culture animations, KAWS often includes characters from The Simpsons and SpongeBob SquarePants. Visit Phillips to view the entire collection and to place a bid.