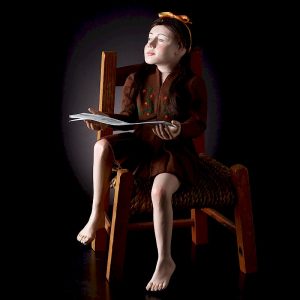 Morton Bartlett did not have a family, so he made his own. It was only after Bartlett died that the life-sized dolls that served as his family became widely known. In the upcoming Outsider, Fine Art, & Curious Objects auction, presented by Rago Auctions, one of Barlett’s dolls will be available to bidders. The girl comes with a chair, in which Bartlett placed her so that it appears she is daydreaming. “Day-Dreaming Girl” is the only figure by Bartlett that is not in a private collection or owned by an institution. Like Barlett’s doll, the other lots in the upcoming Rago auction offer bidders fine art by outsider artists.

One of the lots with the highest estimated value is Alex Grey’s untitled acrylic painting. In 2002, a New York Times art critic referred to Grey’s work as “psychedelic realism”, which is an apt description of this piece. According to his website, Grey grew up collecting dead animals in his neighborhood and eventually worked in Harvard Medical School’s Anatomy department, where he prepared cadavers. The untitled painting in this auction combines Grey’s understanding of anatomy with his interest in psychedelics.

Beyond paintings, another notable piece in this auction is a series of displays with taxidermized squirrels posing as boxers, “The Prize Fight”. Taxidermy was popular in the mid-to-late 19th century in England, during Hart’s life. Rago Auctions points out in their description of the lot that many of Hart’s contemporaries, even the likes of Charles Dickens, enjoyed looking at anthropomorphic taxidermy. Those interested in any of these lots can register to bid on Bidsquare.