ONE: A Global Sale of the 20th Century 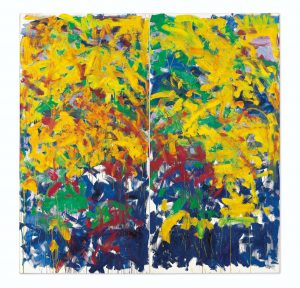 The son of Jewish immigrants from Poland, Barnett Newman (1905 – 1970) was an American artist and one of the frontrunners in color field painting. He also made several contributions to Abstract Expressionism. Among the leading lots featured in ONE: A Global Sale of the 20th Century, presented by Christie’s, is Onement V, an oil on canvas painted by Newman in 1952. Newman considered his Onement series as a milestone of maturity in style. The series depicts thick vertical lines of color, applied with a palette knife, that define the spatial aspect of the painting. Another highlight is Les Femmes d’Alger (Women of Algiers), version ‘F’ by Pablo Picasso. This work is part of a series of 15 paintings and drawings by the Spanish artist. Created between 1954 and 1955, the series was inspired by Eugène Delacroix’s 1834 painting Femmes d’Alger dans Leur Appartement (The Women of Algiers in their Apartment).

Also available is Brice Marden’s oil on canvas titled Complements, a two-piece artwork with each canvas measuring 72 by 48 inches. Marden is an American artist who gained international recognition as a master of monochrome panels. To view the complete catalog and register to bid online, visit Christie’s.