On The Auction Block Day-2 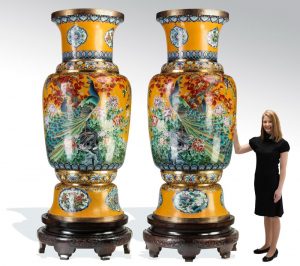 Salvator Rosa was regarded as the most unconventional, rebellious yet romantic painter of landscapes. Adopted as a hero by painters of the Romantic movement in the later 18th and early 19th centuries, his paintings didn’t just come alive but also made viewers believe they were present in the moments depicted in the paintings. A similar marvelous oil on canvas by Rosa, depicting two figures near a winding path leading to a village with a mountainous landscape in the background, is being showcased at the two days On the Auction Block by Great Gatsby’s Auction.

Sharing the center stage with Rosa with the highest estimated value of $18,000 is a pair of monumental Chinese cloisonné pheasant vases. It stands tall with 80″ height and 30″ width, showcasing a variety of motif including Shou character, Ming dragons, bands of lappets, and the popular symbols of Chinese numismatic charms, the Eight Precious Things. Auction buyers can also bid for items such as Tanzanite – diamond, of 14 karat gold bracelet and a French carved walnut cabinet from the 19th century. To view and bid, visit Invaluable