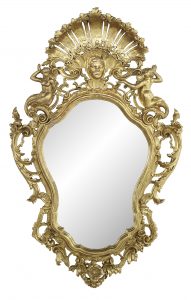 In 1980, George Rodrigue worked on a painting to illustrate a book of Louisiana ghost stories. During his research, he came across the tale of Slaughterhouse, which tells the story of an evil watchdog. Inspired by the tale, the haunted dog is seen in many of his subsequent paintings. Rodrigue’s work titled God Bless America, September 11, 2001 shows an American flag behind the blue dog. A silk-screened print of the piece will be available in the upcoming Interiors Live Auction, presented by New Orleans Auction Galleries,

An Iranian Serapi carpet will also be included in the sale. This antique piece is characterized by designs from Laristan traditions, including interlinked geometric and cross patterns. The auction will feature a painting titled Children Shrimping by William McTaggart. The artist was a pioneer of Impressionism before the movement gained popularity. He was best known for depicting the changing mood of the sea. Register to bid on any of these items by visiting New Orleans Auction Galleries’ website.