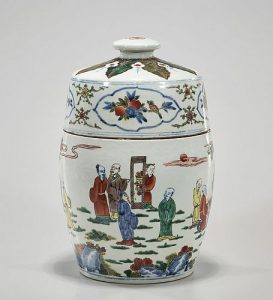 The production of porcelain decorative art reached its height during the Chinese Ming dynasty. These porcelain pieces, particularly moon flasks, were often made in a traditional style. Moon flasks were mainly designed with symbolic floral motifs that reflected the passing seasons. A blue-glazed moon flask vase is among the highlights of the upcoming Single Owner Los Angeles Collector auction, presented by I. M. Chait Gallery. This piece has a circular body with a narrow cylindrical neck. The front shows a dragon motif in white.

Another key lot is a Japanese painting in the style of Utamaro. A printmaker and painter, Utamaro was known for his skillful portraits of women. He was also one of the most prominent artists in the ukiyo-e genre. Utamaro’s style blended elements from the emaki (picture scrolls) produced in the Kamakura period with the mature decorative style of the Tokugawa period. The featured painting is a portrait of a geisha, a traditional entertainer who attends to guests during meals, banquets, and other occasions. To view the complete catalog and register to bid online, visit Bidsquare.