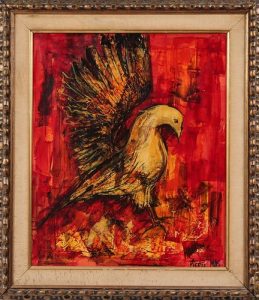 Zapotec artist Rufino Tomayo brought Mexican folklore to life using motifs. There was something about watermelon that appealed to him, as it often became the subject of his works: “They [watermelons] are a smile from Mexico.” One of Tomayo’s watermelon paintings is featured in the New York City Estate Auction, presented by Showplace Antique + Design Center . The simplicity of his paintings often allowed viewers to focus on the shapes and space occupied by the fruits. His use of varying shades of red, pink, sepia, white, and gray set him apart as a leading colorist of the 20th century.

Also available is a red “Composable” chair from L’Atelier. Designed by Jorge Zalszupin, it is a faux leather chair with tufted upholstery and a metal frame. After World War II, Polish-born Zalszupin moved to Brazil with a desire to reconstruct a post-war world. While there, he honed his skills in modern architecture and furniture, combining leather with Brazilian rosewood. His designs are characterized by well-defined proportions and attention to detail. A landscape painting from George W. Water; furniture from Guiseppe Scapinelli, Joaquim Tenreiro, Sergio and Giorgio Saporiti; and an acrylic triptych from Peter Mackie will be featured in the sale. For more details on all the auction lots, visit Bidsquare.