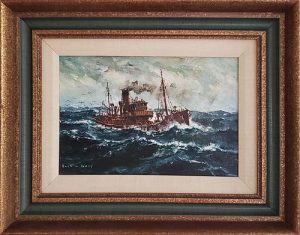 Jack L. Gray was a marine painter well-known for his depictions of skiffs and fishing boats. Born in Nova Scotia, Gray was the only son of a civil engineer. As a child, the artist loved painting ships and sea scenes. He went on to learn painting at the Nova Scotia College of Art. Gray’s marine scenes are famous for their realistic nature, sense of depth, and earthy color palette. The upcoming Rafael Osona Nantucket Auctions event presents an important marine scene by Jack L. Gray. Titled Steam Trawler At Sea, the oil painting depicts a fishing trawler in the middle of the ocean.

Another highlight is a wood carousel pig by Gustave Bayol Carousel Company. Gustave Bayol was a prominent woodcarver who learned his craft from his father, a cabinetmaker. Initially involved in ornamental carving, Bayol later switched to making carousel horses. His carousels were among the most popular in France. The available wood carousel swine features a lolling tongue, a saddle cloth, and blue ribbons.
The auction also features oil landscapes of Nantucket by Illya Kagan. The artist’s paintings are known for their fluid nature and reflect Kagan’s love for Nantucket. Jewelry by Simon G., Reed and Barton sterling silver flatware, an ivory and baleen cane, and an antique transit in a fitted box round out the listings. Interested collectors can explore the full catalog and register to bid online on Bidsquare.