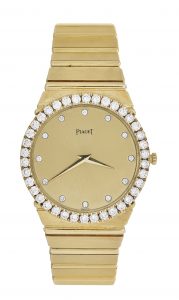 Edmund Tarbell, a leading American Impressionist painter, began incorporating family members and horses into his paintings in 1892. These works used a blend of en plein air scenes of domesticity with portraiture and sporting art. Between 1895 and 1896, Tarbell created several paintings and pastels of his eldest daughter, Josephine, who became one of his most frequently-used models. An oil painting by Tarbell titled Josephine With Pony is highlighted in the upcoming March Major Estates Auction, presented by New Orleans Auction Gallery. This piece depicts Josephine in a voile pleated cotton dress, sitting on a small brown mare.

George Rodrigue’s painting titled Home Office Blues is also highlighted in the sale. In 1999, a New York advertising firm approached Rodrigue on behalf of Xerox, their client. Rodrigue was asked to create a series of paintings to promote the company’s new range of home office products. Rendered in blue and orange, the available piece shows Rodrigue’s signature Blue Dog sitting in an office chair, gazing at the viewer. Its image is also seen hanging on a wall calendar and coming out of a printer. Collectors can view a selection of antique rugs, jewelry, handbags, watches, and furniture as well. Visit New Orleans Auction Gallery to browse the full catalog and register to bid.