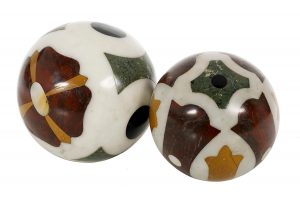 American Impressionist Edmund Charles Tarbell learned his craft while studying in Paris, working under Gustave Boulanger, Jules-Joseph Lefebvre, and Adolphe William Bouguereau. Both the Impressionists and the Old Masters who influenced the development of his style. Often painting upper-class women at leisure, Tarbell’s work enjoyed popularity among wealthy American patrons. An example of his paintings will be available in the upcoming Major Estates Auction, offered by New Orleans Auction Galleries. This piece likely shows the artist’s eldest daughter, Josephine, sitting on a horse. Riding the pony barefoot, she wears a ruffled white dress and smiles at the viewer.

Another piece of interest in this sale is a 17th-century oil painting after Tiziano Vecellio, also known as Titian. This work, titled The Worship of Venus, shows dozens of cherubs resting before a statue. An 18th-century label on the back attributes it to Francesco Albani. Several other pieces of fine art from George Morland, Fritz Zuber-Buhler, and Louis-Eugene LeRoux will be available as well.

Furniture and carpets are especially highlighted in this event, including an antique Sultanabad rug from Northwest Persia. Sultanabad carpets are best known for their repeated flower and geometric patterns, which draw upon traditional Persian motifs. The available rug is dominated by a central blue medallion, which is uncommon for the style. A pair of Louis XV beechwood fauteuils with gros-point upholstery, a suite of 12 polychrome chairs, and several crystal chandeliers will also be presented. Browse the complete catalog and register to bid by visiting Invaluable.