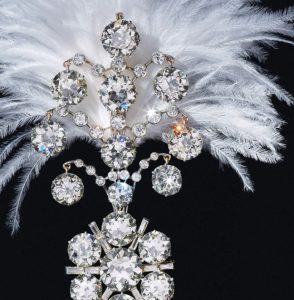 The auction Maharajas & Mughal Magnificence, offered by Christie’s, primarily features jewelry, paintings, and weapons from the Indian subcontinent from the Mughal Empire to the early 20th Century. The Mughal Empire ruled much of the subcontinent from the 16th to the 19th century and several of these lots offer a look into life at that time. This includes the painting “Two Ladies Sharing a Tender Moment”, which is a reminder of the promiscuous lifestyle some led in the Mughal royal court. Another notable example is a 19th-century khanjar dagger with an intricate handle set with rubies, emeralds, and turquoise. The Sanskrit title “Maharaja” means “great ruler” or “great king”. Some of the items in this auction are associated with the maharajas of the 20th century, including an 18k gold pocket watch with the image of Maharaja Bhupinder Singh of Patiala. The item with the highest estimated value in the auction is a “devant-de-corsage” brooch made for Solomon Joel, who made his fortune in South Africa from diamond mining, with four of Joel’s best diamonds. Those interested in any of these pieces can register to bid on Christie’s website.