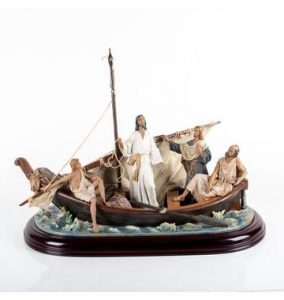 One of Europe’s most prestigious porcelain brands is Lladró. Each piece of handcrafted Lladró porcelain has a story, sometimes history and even mythology behind it. This July, Lion and Unicorn will offer a fine selection of Lladró figurines and collectibles in its Collectors Auction. Day 1 kicks off with a Jesus in the Tiberius figurine. It is a limited-edition piece. It is 437th out of 1,200 pieces that Salvador Furio hand-sculpted between 1984 and 2016. It has a Grès finish with a Lladró back stamp. A glossy finished sculpture of Hindu goddess Radha and god Krishna playing flute beside a white bull is also available in the auction. It was hand sculpted between 2005 and 2009 by Francisco Polope. The gods, goddesses, celebrations, and traditions of Sanatana Dharma or Hinduism are well represented among the Lladró listings. Day 1 of the auction also has works from Royal Doulton, Moorcroft pottery, Dennis Chinaworks, Michael Sutty, Royal Vienna, and Minton.

Carmen and Diego figurines from Royal Doulton kick off Day 2 of the sale. The Carmen figure wears a red, black, and gold mask with a two-tassel jester hat. She holds a gilded brass crescent moon on a brass stick. The piece is made of Prestige Bone China numbered 36 from the Mardi Gras carnival collection issued in 2006 through 2009. It was crafted by Shane Ridge for Royal Doulton. Another notable lot is a glossy porcelain sculpture of two colorful birds from Hutschenreuther. The bullfinch and goldfinch are perched on a palm tree branch. It is a 20th-century piece crafted by K. Tutter. Day 2 rounds up the auction with an extensive collection of animal figures from Doulton, Boehm, Royal Worcester, Goebel, Beswick, Hutschenreuther, Rosenthal, and others. It also offers fine porcelain vases, vessels, and trinket boxes from Doulton, Wedgwood, Roseville Pottery, Hull Pottery, Nemadji Pottery, Royal Bayreuth, and Halcyon Days. Find the listed items and more on Lion and Unicorn.