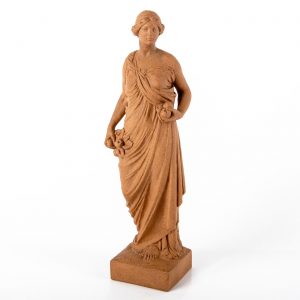 John Doulton established English ceramics and home accessories maker Royal Doulton in the Lambeth area of London in 1815. His son engaged gifted artists to design elegant figurines and vases. Today, the manufacturer is best known for its stoneware tankards, storage jars, and bathroom ceramics. Several rare Royal Doulton figurines will feature in the upcoming Lion and Unicorn auction. A figurine depicting a Roman goddess of abundance is especially notable. She stands with fruit in her hands. Artist John Broad’s initials can be found on the base, along with the Royal Doulton Lambeth backstamp. Also from John Broad is a semi-nude figurine of a woman.

A large character jug, titled The Witch, by Royal Doulton also leads the listings. The handle of the prototype resembles a broom with a black cat. White flowers and a frog rest on the side of the witch’s hat. Additionally, the sale offers a glazed stoneware piece designed in the form of a seated faun playing a pan flute. The blue, green, and brown figurine has a Doulton Lambeth impressed backstamp. To view the complete catalog and register to bid online, visit Lion and Unicorn.