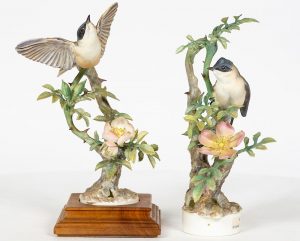 The Late Summer Estate Auction, offered by Ahlers & Ogletree, consists primarily of period antiques, fine art, and Asian decorative arts. A painting by Hendrick Mommers titled “Southern Landscape with Shepherdesses and Vegetable Sellers” is among the most valuable pieces up for sale. Mommers was a Dutch golden age landscape painter known for his vegetable market scenes, this painting being a prime example. He was a member of the Haarlem Guild of Saint Luke, an almost mythical painter’s guild in Haarlem, which was first mentioned circa 1496. All official records of the organization have been lost.

Another work by a well-known, highly-valued artist is Plate 11 from the “Poemes” series (1968) by Marc Chagall (signed by the artist and numbered 13/26). Chagall was a Russian-French artist of Belarusian Jewish origin and an early modernist. His work is associated with several major artistic styles, and he immersed himself in virtually every artistic format of his time, including art prints, tapestries, ceramics, stage sets, stained glass, book illustrations, and paintings. His reputation was divided between that of a pioneer of modernism and a major Jewish artist. Though, Chagall saw his work not as “the dream of one people but of all humanity.” Herewith you will find one such dream.

Of the more unusual lots up for bid is a rare sterling silver “Jolly Roger” skull clock with quartz movement by Corum (Swiss). The clock was made as a limited edition (number 10 of 10) in South America, and is marked “Corum 925” underneath. The skull lifts to reveal the clock face, which is centered on a spider in its web, and the face is encircled by a silver serpent. The spider’s position indicates the alarm setting, which is adjusted with the crown on the right. A second crown on the left sets the time. Corum is renowned for their quality and innovative watchmaking, and the company releases specially crafted limited editions known as “World Premiers” on an annual basis. One striking item of note about this clock is that its original retail price was $12,850, and similar limited Corum items have sold well above the estimated sale price of $2,000-$4,000. View any of these lots and register to bid at Ahlers & Ogletree.