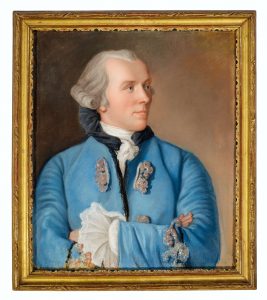 A work from Jean-Etienne Liotard, titled Portrait of Philibert Cramer, will be available in an upcoming Christie’s sale. Often described as porcelain-like, Swiss painter Jean-Etienne Liotard’s pastel portraitures exemplified his attention to detail. Explaining his method of painting, Neil Jeffares writes in the lot essay: “To achieve his highly enameled finish, Liotard compressed the pastel deeply into the support using the stick itself rather than a conventional stump.” Pastel portraits reflecting the prevailing Realism style would become the trademark of Liotard’s long and successful career. In the available painting, Philibert Cramer can be seen wearing a blue coat embroidered with silver, which creates a contrast against the plain background.

The Old Master & British Drawings auction also highlights Gaspar Van Wittela’s take on the landscape of Naples. The offered lot is a key example of the artist’s detailed cityscapes. His work shows the Riviera di Chiaia, with Mergellina and Posillipo in the background. Among the 96 lots in the catalog are works from Old Masters such as Jean-Honoré Fragonard, Giovanni Battista Tiepolo, and Antonio di Benedetto Aquilo degli Aquili. View the full listings and register to bid on Christie’s.