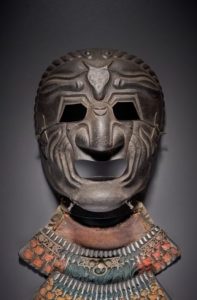 Before Katsushika Hokusai’s The Great Wave print became an international sensation, it was just one part of a series exploring the capacity of Japanese landscape art. Hokusai was an ukiyo-e woodblock print artist active in the late 18th and early 19th centuries. During his long career, Hokusai constantly experimented with his style to push the boundaries of the genre. Christie’s will offer an edition of his most famous print, titled in full Kanagawa oki nami ura (Under the well of the Great Wave off Kanagawa), in the upcoming Japanese and Korean Art auction. The focal point of the work is the massive, foaming wave positioned on the left side, while Mount Fuji is shrunk to a mere hill in comparison. Lots from other noted Japanese printmakers– including Utagawa Hiroshige and Kitagawa Utamaro– will be available as well.

The auction is set to include a selection of Korean and Japanese ceramics, many predating the 19th century. An iron-decorated porcelain jar is among the key items, showing the twisting body of a dragon wrapping around the globular body. This piece was created during the Joseon dynasty, which governed the Korean Peninsula from 1392 to 1910. Another vase from the Joseon dynasty shows three worthies playing a traditional game. The auction house notes the unusual placement of this scene on a ceramic, as it was typically reserved for paintings. Find more information on each of the lots and place a bid on Christie’s.