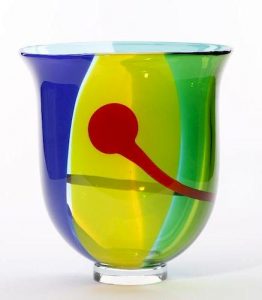 The Italian Art Glass and Decorative Art auction, offered by Turner Auctions + Appraisals LLC, is an assortment of collectibles and artworks. The sale features an extensive variety of colorful Italian glass, plus several Lalique items. The pieces of art are primarily from the 19th and 20th centuries, ranging in medium from oils and watercolors to pastels and engravings.  The subject matter is similarly diverse, including wildlife art, portraits, still life, landscapes, and abstracts.

Among the paintings is a portrait of Phoebe Hearst by American artist Orrin Peck. Peck’s mother met Phoebe Hearst on a steamship voyage from Panama to San Francisco, and the two became friends. Peck himself grew to become a close friend of Phoebe’s son, the newspaper tycoon William Randolph Hearst. Peck was commissioned to paint portraits of Hearst as well as his mother. One of his paintings hangs in Hearst’s San Simeon (Hearst Castle), where Peck also designed the landscaping in 1920.

Among decorative arts are Herend candelabras, porcelain and Asian boxes, Quimper and Kingsware-style pottery, Royal Doulton figurines, brass snuff boxes, silver plated items, and a letter signed and sent by John F. Kennedy. The last item is addressed to one of his supporters, thanking them for their backing; it was written soon after his election to the presidency. It is signed on United States Senate letterhead and includes the original envelope from the White House.

Filling out this sale is a large assortment of car mascots from the early to mid-20th century from a single, long-time collector. View any of these lots and register to bid on Bidsquare.