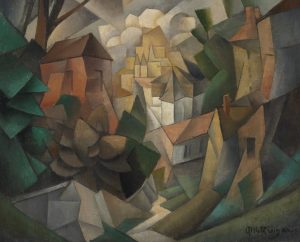 Following the Impressionists were waves of Modernist painters and sculptors. Giorgio de Chirico’s Il Trovatore was painted in the early 1950s, following the Metaphysical art movement that de Chirico helped launch. A geometrical human form is shown taking a step in front of a Spanish-style building, complete with de Chirico’s signature long shadows and vaguely menacing light. A nearly monochromatic oil painting of a horse, rider, and village by Marc Chagall will be highlighted as well. To view these lots and register for online bidding, visit Christie’s.