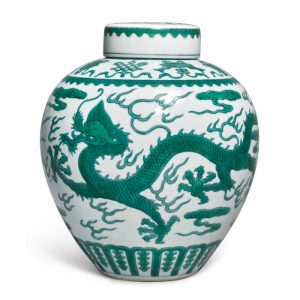 One featured item of the upcoming Important Chinese Art auction, offered by Sotheby’s, is a gold, silver, and glass-embellished bronze vessel from the Warring States period. The piece was likely created for a royal patron. Due to its uncommon style, the auction house indicates that the method for its creation is unknown. Only three other bronze vessels are known to exist with similar glass inlays, and only one of them has been made public. The piece at auction has also not been published or exhibited since 1938.

Other key pieces in the sale include a painting of flowers, fruits, fish, and vegetables by Li Shan. Recognized for a dramatic and confident style, Li and seven other painters became known as the “Eight Eccentrics of Yangzhou.” Though the piece in the sale comes from his more subdued later period, it nevertheless reflects his training as a student of Jiang Tingxi, who was known for his paintings of birds and flowers. Other works in the auction include a jade “Red Cliffs” table screen from the Qing dynasty, blue and white porcelains from the Ming dynasty, a pair of cloisonné enamel dragon ewers from the 17th century, and more. View any of these lots and register to bid on the Sotheby’s website.