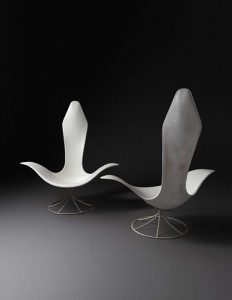 When World War II ended in 1945, the post-war period saw a sea of artists whose concepts and works would outlive their makers. Solomon (Sol) LeWitt was one of those artists. Believed to be one of the founding members of Conceptual art and Minimalism, he stated that every artwork must begin with an idea, no matter the medium. During his career, LeWitt created over 1,200 artworks but is best known for his large-scale wall drawings, including the one in the Centre Pompidou-Metz, France. LeWitt would vaguely direct an assistant or a group of assistants to produce a work of art, challenging the fundamental belief that the artist must be in control. His wooden sculpture titled Cube Without a Cube will be presented by Hindman this July in the How Soon is Now | Post War Art & Design auction.

Karel Appel was known for his involvement in Cobra (a short-lived postwar avant-garde movement) and his spontaneity, famously saying, “I just mess around.” In many of his paintings, Appel used simple forms and vivid colors. The Dutch painter, sculptor, and poet was inspired by children’s drawings and primitive art that, according to Appel, were unspoiled and pure. The available Appel painting is titled He Is Too Late. Visit Bidsquare to view the entire catalog and place a bid.