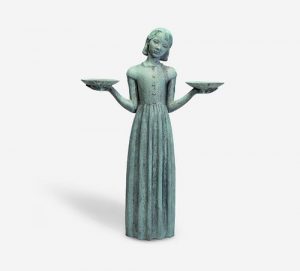 While many of her contemporaries pursued abstraction, Chicago artist Sylvia Shaw Judson felt drawn to lifelike garden figures. Judson supported Quaker’s causes and believed in a “delicate balance between the outward and the inward, with freshness and a serene wholeness and respect for all simple first-rate things.” Sylvia Shaw Judson’s most famous design will come to auction in Freeman’s upcoming American Art and Pennsylvania Impressionists sale. Judson cast the piece in 1938. Bird Girl depicts a young child wearing a buttoned dress while tilting her head to one side. She holds a bowl in each hand. Another version of the piece appeared on the cover of John Berendt’s Midnight in the Garden of Good and Evil, popularizing both the design and Judson’s work.

This auction features paintings by other notable American artists, including Norman Rockwell’s Piney Rest Motel (Cozy Rest Motel) and Daniel Garber’s Houses – Shannonville. The available Rockwell painting was likely created for a Saturday Evening Post cover. However, it later appeared as an advertisement for the Famous Artists School before entering a private collection. Other notable artists represented in the catalog include Martha Walter, Harry Leith-Ross, and Robert Tait McKenzie. For the complete listings and to place a bid, visit Bidsquare.