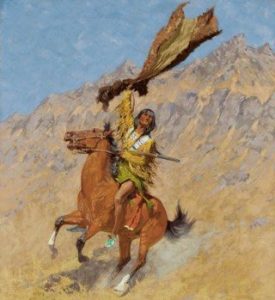 T. Boone Pickens was an oil tycoon and philanthropist known for his civic engagement and shrewd business deals. Pickens collected many artworks depicting the American West throughout his life, including works by Frederic Remington, Howard Terpning, G. Harvey, and others. Part of his collection will come to auction in late October with Christie’s. Among the featured lots is a 1900 oil painting by Frederic Remington. The artist was known in the last quarter of the 19th century for his images of the American West, including cowboys, Native Americans, and the U.S. Calvary. The available painting, titled The Buffalo Signal (If Skulls Could Speak), features a man on a horse holding an animal’s hide up in the air.

Howard Terpning is another artist known for his paintings of the American West. Featured in the sale is a 2001 oil painting by Terpning titled Flags on the Frontier. The painting shows Native Americans and cowboys riding side by side on their horses while carrying flags. View the whole collection and register to bid on the Christie’s  website.