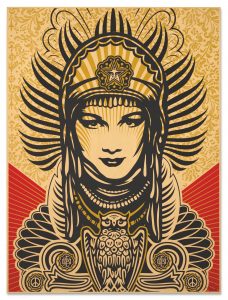 The upcoming Christie’s First Open sale brings original works by well-known and rising artists from the 20th and 21st centuries. One key highlight is a piece titled Peace Goddess on Wood by Shepard Fairey. An American artist, Fairey became widely known as the designer behind the Hope poster for Barack Obama’s 2008 presidential campaign. He originally emerged from the skateboarding world and is now known for his street art, graphic design, activism, and as the founder of the OBEY clothing line.

Other lots by well-known artists include a pair of works by Damien Hirst, one representing his signature spin paintings. The work in question is untitled but signed with the inscription “for Zoe Damien Hirst 2009 BALI” in the lower left of the painting. Hirst is an English artist and among the leaders of the Young British Artists group that emerged in the 1990s. Other artists with works in the sale include Gerhard Richter, George Shaw, Yoshitomo Nara, Venessa Beecroft, and more. View all lots and register to bid on the Christie’s website.