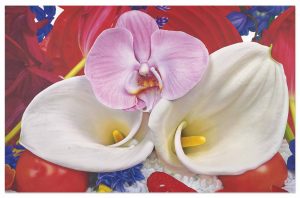 The upcoming Post-War and Contemporary Art auction, offered by Christie’s, will offer 97 pieces of fine art from both rising and established artists. One mixed media piece from Miquel Barceló will be particularly highlighted. A seasoned traveler, Barceló spent much of the 1980s in Western Africa observing the dry weather and land. Christie’s quotes his inspiration for the available piece: “The light in the desert is so intense that things disappear, and the shadows are more intense than the things themselves.” The lot, titled PRSPCTV, is thickly textured in shades of cream and gray. Circular objects cast dark shadows on the background, yet lose their definition as the viewer gets closer to the work. The edges of the canvas are light blue.

Another key artist featured in the sale is Peter Halley. He uses clearly defined blocks and bars of color to form his Minimalist and geometric compositions. Halley is known for applying the terms “prisons” and “cells” to describe his own work, inviting an association between impartial Minimalism and the concept of imprisonment. One of his works, titled Three Prisons, will be presented in this auction. Three of his units are layered on top of each other, together standing over six feet tall.

Contemporary works from emerging artists are also present, including an oil on Plexiglass painting by Evans Mbugua. Originally trained as a graphic designer, the Kenyan artist creates colorful portraits beneath repeating prints that evoke wallpaper. Mbugua’s Spin shows a break-dancer balancing on one arm. Loie Hollowell’s Standing in Light woodcut print will also be presented. Though her works appear abstract, Hollowell’s paintings often use subtle geometry to explore female sexuality. Pace Gallery quotes Hollowell in a recent exhibition: “I want the viewer to come away not necessarily knowing what I was trying to tell them… but absorbing an impression of brightness or richness or radiance that has something to do with their relationship to their own body.” The available piece is arranged in orange and teal concentric circles. View the complete catalog for this auction and register to bid by visiting Christie’s.