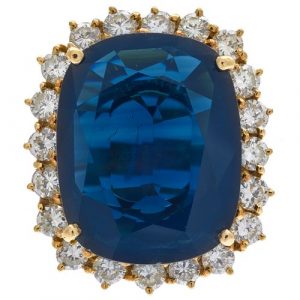 Ancient censers were vessels used for burning incense, perfume, or pastille. Varying in size and design, some were made of simple earthenware while others were intricately carved in metal. One of the highlights of the upcoming Fine Estate auction is a cloisonné enamel tripod censer from the 19th century. Decorated with a pair of opposing dragons on a patterned background, the lid has an openwork decoration of bats and clouds. A cloud finial rests on top of the piece. Another lot of interest belonging to the 19th century is a jadeite openwork carving featuring a chilong dragon climbing fungus branches on a rocky outcrop. This semi-translucent mint green stone is fitted on a wood stand.

The sale also showcases a Khmer sandstone sculpture from the Angkor Wat period depicting the head of a male deity. Carved with a faint smile, almond-shaped eyes, and ridged eyebrows, the deity has an elaborate hairstyle and crown. To view the complete catalog and register to bid online, visit Bidsquare.