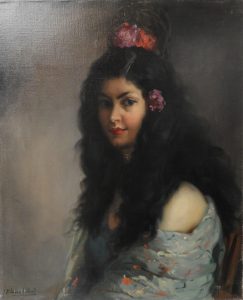 In early 19th-century America, landscape scenes became the preferred artistic theme. Blending Romanticism and Realism, a house painter named Thomas Worthington Whittredge began painting portraiture and landscapes during this time. Inspired by the scenes around him, his work often captured detailed ferns and rocks. An oil painting from Whittredge will be offered in the upcoming Fine Art | Asian Art | Décor sale, presented by Litchfield County Auctions.

A floral still life painting from Theresa Bernstein is also among the standout pieces in this event, which will include nearly 700 lots. With a career that lasted over 90 years and spanned the 20th century, Bernstein’s work captured scenes of urban life, including parades, parks, and concerts. She was associated with the Urban Realist movement, also known as the Ashcan School. A 1960s ceramic piece depicting a white duck from Birger Kaipianen is also featured. Kaipianen was considered one of Finland’s most acclaimed modern ceramic artists. A pair of lion tiles from the Ming dynasty round out the auction. View the full listings and register to bid online on Invaluable.