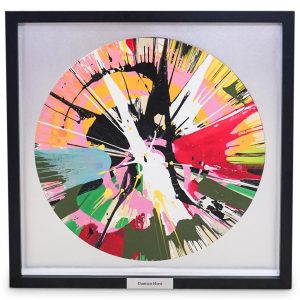 Akiba Antiques will kick off March with fine art, Asian antiques, furniture, and more in this auction. Among the highlighted fine art pieces is an original spin painting by Damien Hirst. The artist’s spin paintings are known for their vibrant colors, accessibility, and playfulness. In 1993, Hirst even dressed up in full clown makeup and invited attendees of a fair to make their own spin paintings. This particular piece was made in 2012 with bright splotches of blue and red to the left and right.

Among the Asian antiques on offer is a tree made of Chinese jade and stone from the early to mid 20th century. The work’s 50 flowers range in colors and materials, including a chain of small turquoise flowers inching their way up the tree. Decorating the tree’s planter are several cranes surrounded by swirling clouds.

Elsewhere in the catalog, Asian antiques collectors will find a Japanese Satsuma porcelain charger. A samurai warrior stands in the foreground of this plate. Though his face, shoulders, and much of his armor are visible, his arms and legs are indistinguishable from a crowd of wise men who surround him. This piece is an example of late Satsuma ware, which was produced in 19th and 20th-century Japan with an eye toward Western tastes. Those interested in this or any other piece can register to bid on LiveAuctioneers.