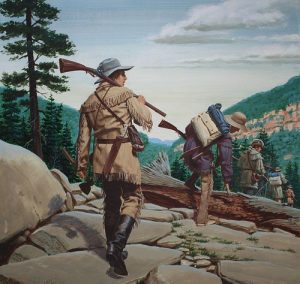 Featured in this Fine Art, Antique, & Jewelry Auction is a minaudière from Boucheron, as well as an oil painting by Jean Paul Laurens and a 19th-century Chinese glass snuff bottle. Frederic Boucheron founded his company in 1858. Known for producing jewelry for royalty, Boucheron’s clients have included Queen Elizabeth II, Russian Prince Felix Youssoupoff, Czar Alexander III, Queen Farida of Egypt, and Queen Rania of Jordan. Found in this auction is a Boucheron minaudière, a style of strapless handbag popular in the 1930s. This 18-karat gold, enamel, nephrite, and diamond minaudière would have replaced an evening bag. The small case could hold small items and primarily served a decorative purpose.

Also found in this sale is a piece by Jean Paul Laurens, a French painter, sculptor, and popular teacher known for his historical scenes. He was commissioned by the French Third Republic to paint numerous public works that included the steel vault of the Paris City Hall and the decorated ceiling of the Odeon Theater. In this Helmuth Stone Gallery auction is a large oil painting faintly signed and dated by Laurens. The painting shows an arch with a knighted figure in the center among various statues and paintings. View the entire catalog and register to bid by visiting Bidsquare.