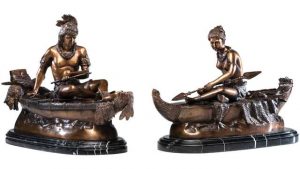 The upcoming Fine & Decorative Art: Discovery Auction presented by Cowan’s Auctions will feature an assortment of American and European paintings, prints, furniture, rugs, pottery, and porcelain. Highlighted in the auction is a pair of 19th-century bronze sculptures depicting a Native American maiden and warrior in canoes, both mounted on marble bases and signed “Duchoiselle.”

Beach Scene by Jane Peterson, a prominent female American painter, is another highlight of the auction. The 20th-century painting depicts a beach along the Massachusetts coastline. Also featured in the auction is a set of six antique porcelain plates by Bourdois & Bloch. Made in the late 19th century, each plate is hand-painted with a gilt and floral garland decoration. Groups of cut glass pitchers and bowls, as well as Victorian mourning wreaths and funereal objects, will be on offer as well. To view these items and explore more of this auction, visit and register to bid on Cowan’s Auctions.