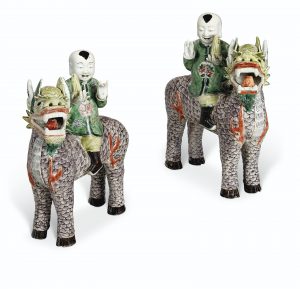 In the upcoming auction, Christie’s will present paintings, sculptures, and decorative art with an emphasis on Chinese porcelain. The artistic styles represented in this sale range across the Kangxi, Qianlong, and Yongzheng empires. Among the key lots is a famille verte sculpture depicting two boys riding mythical qilin. According to Chinese beliefs, the appearance of a qilin indicates the birth or death of a benevolent ruler or sage. Associated with good luck, the qilin is also known as the “Chinese unicorn.”

Animal tureens were found at table services of opulent households in the 18th and 19th centuries. A pair of goose tureens will be featured in the upcoming event. The lot essay notes, “It has been suggested by scholars William Motley that the shorter neck and more naturalistic coloring of the present model pre-dates the more commonly-found long-neck goose tureens.” Bidders interested in works produced during the Qianlong period can also consider a famille rose Indian market dish. Executed around 1770, the porcelain dish is painted in white enamel to illustrate the effect of lacework. This technique is known as bianco sopra bianco. Those interested in this or any other piece can register to bid on the auction house’s website.