Figurines From Beatrix Potter, Disney, Bunnykins, and More at Lion and Unicorn 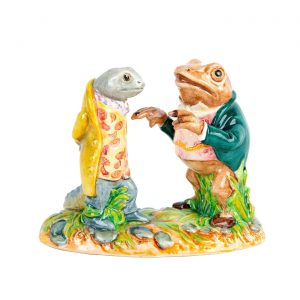 Though Peter Rabbit is likely the best-known character of author and illustrator Beatrix Potter, fans of her work may also know her tale of Mr. Jeremy Fisher, a frog that lives at the edge of a pond in England’s Lake District. Many of Beatrix Potter’s characters were licensed and produced as figurines posthumously. Examples of these figurines will appear in the upcoming Storybook Collectibles Auction, offered by Lion and Unicorn. Among the leading lots is a prototype figurine of Mr. Jeremy Fisher standing and welcoming his friend Isaac Newton (the newt), as illustrated by Potter. This prototype is one of few with both characters placed side by side.

Beyond the Beatrix Potter characters, the auction includes more than 80 figurines from the Bunnykins collection, three items from Beswick Collectibles, and more than 40 Disney figurines. One of the Disney lots is a Mickey Mouse figure holding his sword from the film Brave Little Taylor (1938). “I Let ‘em Have it!” is printed on the base. This figurine was created in 1993 as a Members Only sculpture. View any of these lots and register to bid on Lion and Unicorn.