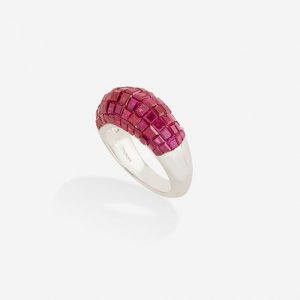 Starting in the late 1930s, Oscar Heyman & Brothers became known as the “jewelers’ jeweler” for its behind-the-scenes work with brands such as Van Cleef & Arpels and Tiffany & Co. Since then, Oscar Heyman has evolved to become an independent firm, notably creating pins for the Apollo 16 flight to the Moon and jewels for Billy Porter’s 2019 Oscars look. Available in the upcoming Fall Jewelry and Watches auction, offered by Rago, is an invisibly-set ruby ring from the brand. This bombe-style ring has a maker’s mark.

Unusual jewelry items are the focus of this sale, including a diamond and gold necklace by late 19th-century jeweler René Boivin. The French jewelry craftsman is known as the jeweler of the intelligentsia. The Bovin necklace features baguette-cut diamonds as the central motif that is separated by diamonds and yellow gold scrolls. A pair of 18-karat yellow gold cuff bracelets from Barry Kieselstein-Cord also stand out. These cuffs, made in the early 1980s, are from the designer’s Caviar collection. Key timepieces in this auction include a Rolex GMT-Master wristwatch with a Pepsi bezel and a Patek Philippe annual calendar watch. Find the full catalog and register to bid on Bidsquare.