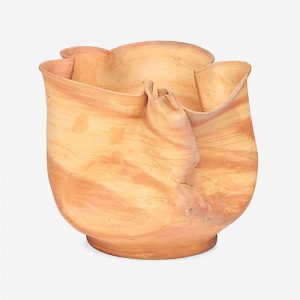 The drift towards modernism in the early 20th century is a fascinating one. It marks a departure from traditional forms into something entirely new. Art Nouveau continues to fascinate us in its originality. Rago’s upcoming auction of Early 20th C. Design represents a case study of this distinct period. With a particular focus on ceramics and glass, this sale of over 200 lots well captures the spirit of those changing times.

The beauty of the early 20th century style is often in its imperfections and unexpected elements. A George Ohr vessel has the pattern of sandstone, scroddled with different clays. This otherwise unremarkable piece is unusual in its crumpled top, however, pinched and bunched in a challenge to traditional pottery. Another standout lot is a tobacco jar from London’s Martin Brothers—sculpted to look like a “grotesque creature,” its mischievous eyes and warped smile make a lasting impression.

Not all Art Nouveau and Art Deco artists created work to shock and disrupt, and the beautiful forms that emerged from this time should be equally appreciated. Elegant calla lilies adorn tall vases, soft blue trees spread over multiple lots, and intricate patterns drape themselves over large rugs. Explore the full catalog of this timeless auction and register to bid on Bidsquare.