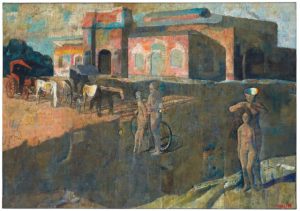 A well-known Nicaraguan painter, Armando Morales (1927-2011) was an acclaimed figure in Central American art. He received his first award at the Central American Painting Contest in 1956 and later exhibited at various shows in Paris. The subject matter of his paintings often referred to the Latin American region. The upcoming Latin American Art auction, presented by Christie’s, features an oil on canvas piece by Morales, titled Place de la Gare, voitures, personages, III. The piece was painted in 1999. Another highlight of the auction is a plywood and maple installation by Los Carpinteros. A Cuban artist collective formed in 1992 in Havana, Los Carpinteros was founded by Dagoberto Rodriguez Sanchez, Marco Antonio Castillo Valdes, and Alexandre Arrechea. Bringing back the traditional artisan guild system, the members of the group integrated elements of design, architecture, and sculpture in their installations.

Arturo Herrera’s untitled collage on acid-free paper is another lot of interest in the sale. The globally-renowned Venezuelan visual artist is best known for blending cartoons and collage. To view the complete catalog and register to bid online, visit Christie’s.