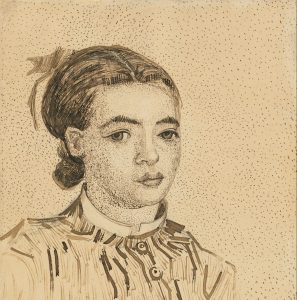 Eight works on paper will come to auction with Christie’s this March. Leading the catalog is a pen drawing by Vincent van Gogh based on his La Mousmé oil painting. Inspired by Japanese art in the 1880s, van Gogh was fascinated by a young Provençale girl who lived near his Yellow House in Arles. He decided to paint this young woman with a slight pout in the Japonisme style. Van Gogh returned to the same subject after he finished the painting during a burst of creative energy. The available lot uses various stippling techniques to depict the sitter’s face and shoulders.

The upcoming auction includes several other works on paper from 19th– and 20th-century artists. René Magritte’s Journal intime gouache on paper piece is among the key lots. Executed around 1954, Journal intime shows two of Magritte’s signature bowler-hatted men standing on a rocky outcrop. Dressed in long trench coats and carrying suitcases, the figures appear to have turned to stone. The item’s lot description notes that Magritte’s “petrification” works in the 1950s were designed to challenge the viewer’s sense of reality.

Several other artists are also included in the auction. The catalog offers a darkly-shaded river scene from Post-Impressionist artist Georges Seurat, a self-portrait by Lucian Freud, and a pen-and-ink work by Henri Matisse. Find the full auction details and place a bid on the Christie’s website.