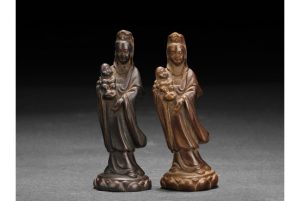 In the early 18th century, snuff bottles were produced specifically for the emperors of China. These miniature pieces, measuring three and a half inches high, demonstrate the craftsmanship of the Qing dynasty. A complete set of twelve snuff bottles will be available in the upcoming California Asian Art Auction, presented by California Asian Art Auction Gallery. Many of the items offered provide a glimpse of Asian life and culture.

Of the many bodhisattvas in Buddhism, Avalokiteshvara is widely revered as the lord of compassion. Avalokiteshvara is also believed to possess the ability to end all sufferings and render salvation. One of his forms is available in this sale, seated on a double lotus throne with beaded jewelry around his neck. Other featured lots include a range of blue and white Chinese porcelains, each in different patterns. During the Tang dynasty, blue pigment was imported from Persia for Chinese pottery. The intense color in blue-glazed ceramics was used in limited quantities. View all of these lots and register to bid at California Asian Art Auction.