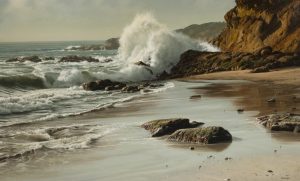 William Wendt was born in Germany in 1865 and did not move to Southern California until marrying in 1906. His landscape painting, “Tahoma: The Eternal”, is among the lots with the highest estimated value in the California & American Fine Arts auction. Tahoma refers to Mount Rainier, which is the highest mountain of the Cascade Range in the Pacific Northwest. The work was produced on one of Wendt’s many trips from the Sierra Nevadas up into the Cascades.

Another artist with a notable piece in this auction is Granville Redmond. Redmond’s untitled work depicts local Southern California flora, including poppies and lupine, a plant with pea-shaped flowers. Despite being deafened due to scarlet fever as a child, Redmond attended the California School of Design. He is most well-known for capturing California’s vibrant flowers in his paintings. John Moran Auctioneers’ description of this painting includes a quote from actor Charlie Chaplin regarding Granville Redmond’s paintings. “Look at the gladness in that sky, the riot of color in those flowers.”

Meanwhile, in the California Living auction, among the lots with the highest estimated value is a Dick van Erp table lamp from 1911. Van Erp was a Dutch-American artist best known for his copper lamps, of which this is an example. Once he emigrated to America, van Erp mostly lived in California, except for a brief and unsuccessful attempt to make his fortune in the Yukon during the Klondike Gold Rush. Another notable lot in the California Living auction is a Mexican sterling silverware set from the mid-20th century. The set includes a kettle, teapot, sugar bowl, and other pieces. You can register to bid for either of these auctions on John Moran Auctioneers’ website.