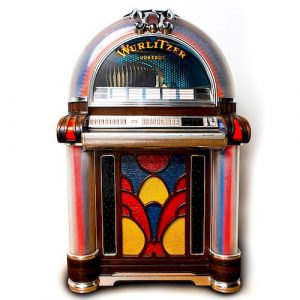 George Lucas was not happy with the original movie poster for Star Wars (1977) and commissioned the Hildebrandt brothers to make improvements.  “I asked [the agent] if they knew what it was about,” remembers Greg Hildebrandt, “and they said, ‘It’s some kind of science-fiction movie.” That poster, produced the year of the film’s release, is available in the upcoming Gentleman’s Library Auction, offered by Whitley’s. The Hildebrandt poster shows a science-fiction series still working out the details: Luke Skywalker wears Darth Vader’s boots, and Leia holds Han Solo’s blaster.  Beyond the Star Wars poster, the other lots in this auction are pieces of 20th-century historical memorabilia.

Available in this auction is a film reel with video from the Pacific Theater during World War II. While the auction house notes that the film has not been inspected, it is believed that the reel contains footage of the Battle of Luzon, the Battle to Recapture Corregidor, and the bombing of Hiroshima. The atomic bomb in Hiroshima was the first of two atomic weapons used against the Japanese under the approval of President Harry S. Truman, less than five months into his presidency.

As its name suggests, the Wurlitzer 1050 Nostalgia Jukebox was intended to remind users of an antique music machine, most notably those produced after World War II. The model available in this auction takes the style of a mid-20th-century jukebox with upgraded sound capabilities. It was the last jukebox Wurlitzer produced before stopping operations entirely in 1974. View each of these lots and register to bid online on Bidsquare .