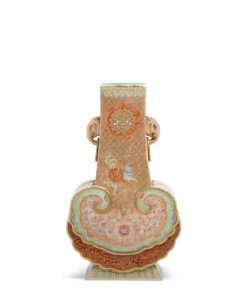 Bonhams presents the upcoming Asian Decorative Art auction, featuring a wide array of Asian works of fine art, decorative art, furniture, and more. Highlighted in this sale is a three-tier cosmetics box and cover with a Qianlong mark. The top of the box is painted with a vignette of two birds, a rose bush, and asters growing behind a garden rock. It is said that in Qianlong’s time, the Qing Empire reached its most splendid and prosperous era with a thriving economy.

Another highlight of the auction is a Republic period enamel vase. This piece is decorated with landscapes and bands of dragons on a blue and yellow enamel background. An 18th-century Huanghuali center table is also among the notable lots. The square top of the table is split into three main pieces. It is set in a mitered, mortise, and tenon frame and rests on a carved key fret apron. Additional lots include a 20th-century six-panel screen depicting cranes both resting and in flight on the main panel. The other panels feature nandina, chrysanthemums, pinks, magnolias, and irises. Also available is a group of books on Chinese art by R. Hobson. Explore the full listings and register to bid online on Bonhams.