Books and Documents Antique and Contemporary, Photography, Lithography and Engravings 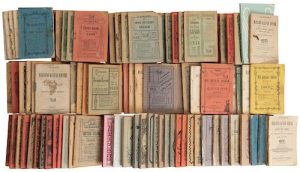 The Books and Documents Antique and Contemporary, Photography, Lithography and Engravings auction, offered by Morton Subastas, consists first and foremost of rare and historic books. Most, though not all, of the books offered are Spanish language texts. Among the most valuable books for sale is an illustrated history of the war between the United States and Mexico. It also has a photo album of historical figures from the Second Mexican Empire, and a first edition, tri-lingual collection of “The Prominent Men of Mexico.” This volume was intended to improve the worldwide opinion of Mexico by “exalting the existence of illustrious men of letters, politicians, military men, scientists, artists, merchants, industrialists, and diplomats.” The auction house calls this item “scarce,” saying that only 300 copies were ever printed.

Beyond books, you’ll also find works of art, framed maps, photographs, posters, and a Medal of the Order of Guadalupe, granted to Don Pablo Glises, a French Treasury Administration Officer. This lot includes a document granting the order, indicated that it was awarded by S.M.I. Maximiliano I, Emperor of Mexico. View all of these lots and register to bid on Bidsquare.