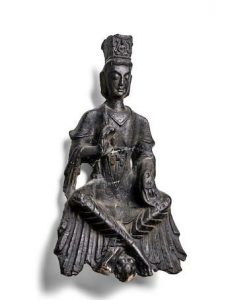 In some Buddhist traditions, Maitreya is considered a bodhisattva residing in the Tushita heaven. He is regarded as the future Buddha, who will return to the earthly world only when the teachings of Gautama Buddha have been completely forgotten. The upcoming Bonhams sale features a rare black stone figure of Maitreya, belonging to the Longmen Caves of the Northern Wei dynasty (5th – 6th century CE). The Northern Wei dynasty witnessed a period of political unrest and Maitreya was believed to summon peace in those troubled times. The available figure has angular features with a smiling visage. Wearing a dhoti, he sits with his legs crossed at the ankles. His right hand is raised in abhayamudra (a reassurance gesture) and his left hand is lowered towards the knees.

Another key lot is a white-glazed ingot-shaped pillow from the Song dynasty (960 – 1279 CE). In ancient times, Chinese people often slept on ceramic pillows. These were especially popular during the Song dynasty. The Cizhou-type pillow is washed with a cream slip and covered in crackled glaze. It is molded in two parts, scripted with a 100-character poem that was composed by the Qianlong Emperor. The poem includes 12 eight-character lines and one four-character line, followed by a short inscription and two seals. To view the complete catalog and register to bid online, visit Bonhams.