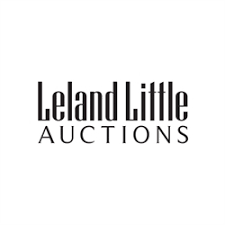 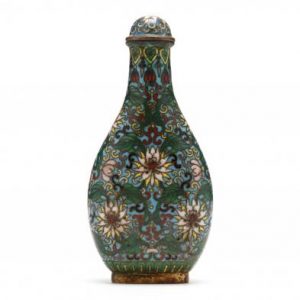 The August Gallery Auction, offered by Leland Little, is primarily a collection of home and office décor. Among the fine antique pieces are three music boxes, one of which is a Regina Coin-Operated table top unit. Regina was an American producer who made these musical instruments. They were usually built for the affluent of the pre-phonograph 19th century, though they admittedly resemble a stylized record player. Their main feature is that the discs can be swapped out to play different songs. Although inoperable, the box itself is made of mahogany, with a hinged panel lid that retains the original label.

Gorgeous and highly sought-after furnishings, such as the Taylor King, midnight blue leather sofas are featured in the auction. These late 20th century pieces have brass nailhead trim, duck feather filled loose cushions, and sit on raised, fluted mahogany feet. A luxurious room anchor, these sofas are as much a work of splendor as they are utilitarian. Taylor King is a North Carolina manufacturer of handcrafted, custom upholstered furniture. They are known for using the finest designer fabrics and leathers sourced from around the world.

Highly noticeable is a lithograph of Femme à la Main Levée by Le Corbusier. Le Corbusier was a Swiss-French architect, designer, painter, urban planner, writer, and one of the pioneers of modern architecture. Dedicated to providing better living conditions for the residents of crowded cities, Le Corbusier was influential in urban planning, and was a founding member of the Congrès International d’Architecture Moderne(CIAM). In 1918, Le Corbusier met the Cubist painter Amédée Ozenfant, in whom he recognized a kindred spirit. Ozenfant encouraged him to paint, and together they rejected Cubism as irrational and “romantic”, and the pair jointly published their manifesto, Après le cubisme and established a new artistic movement, purism, of which Femme à la Main Levée is a fine example.