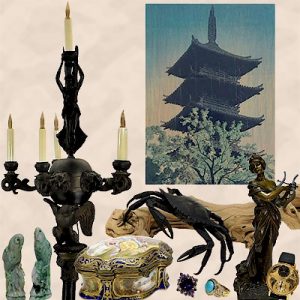 The August Antiques & Fine Art Auction is offered by Bruneau & Co. Auctioneers. Collected from several fine estates around New England and beyond, this sale offers a terrific selection of Chinese arts, Japanese wood blocks, French furniture, paintings, bronzes, jewelry, clocks, and fine accessories. Talking about accessories, a fine choice is a massive patinated bronze pair of floor candelabra torchieres from the late 19th century. It is a finely cast gild with female winged goddesses and a five-light sphere. Figural lion heads terminate into scrolled acanthus leaf arms over ormolu eagles. Corinthian columns are set on classical dolphin-shaped tripod bases. And there are two of them!

For the fine art collector, you’ll find an Auguste Rodin nude figure in pencil and watercolor, standing on one foot with the other foot extended behind into the air in what appears to be a stretch or dance pose. François Auguste René Rodin (known as Auguste Rodin), was primarily a sculptor. Although considered an originator of modern sculpture, he did not set out as such, and was schooled traditionally, taking a craftsman-like approach to his work. It may be that this piece was meant as a sketch for a later sculpture, but it stands on its own as a work of motion and artistic excellence.

Perhaps the most unusual lot in this sale is a small collection of three quarter-midget go-karts that were found in a Rhode Island barn. Two of these have series A-85 H.P. engines, and one a Cushman Husky M9-44. Though each of the small racing vehicles has its own charm, the red-painted kart is the best candidate for restoration since it appears to have a complete interior and exterior and includes bumpers. A quirky and fascinating find for anyone who loves classic karts, small engines, or cool stuff found in a barn. View any of these lots and register to bid on Bidsquare.