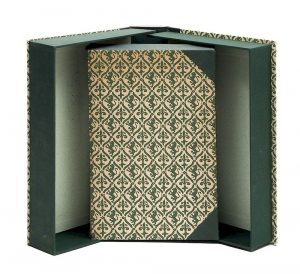 The Auction of Photography, Art, Literature and Automovilism, offered by Morton Subastas, is a book sale from the library of Don Lorenzo Zambrano. Among the most valuable lots in this collection is a complete set of Marcel Proust’s In Search of Lost Time—also known as Remembrance of Things Past. This seven-volume work is considered his most significant and is well known for its length, influence on modern novelists. Its theme of “involuntary memory” is the idea that occurrences from everyday life trigger recollections of the past without continuous conscious effort. Proust began writing the multi-volume novel in 1913 and continued composing and editing it until his final illness and death in 1922.

Of interest to many is a signed copy of A Farewell to Arms by Ernest Hemingway. This limited edition was printed as the 294th of only 510 copies. Though the novel was based on Hemingway’s experiences serving in the Italian campaigns during the First World War, he himself was not directly involved in the battles he portrays, thus placing this highly-successful novel firmly in the realm of fiction.

Though Graham Greene once wrote of his book Babbling April that it was “a book of juvenilia which I prefer to forget,” the first edition on offer is nevertheless beloved and quite rare. Greene spent much of his early literary energy on poetry, which he published while still in school. When his poems were collected as Babbling April, the book received so many bad reviews that a disappointed Greene abandoned poetry and turned himself to fiction and essays. View all of these lots and register to bid on Bidsquare.