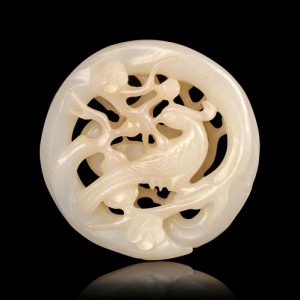 The Guardian Lions, believed to be a symbol of protection, enjoy reverence in Chinese mythology and feng-shui. Statues of the lions can be spotted guarding the entrances of historical temples, mausoleums, and residences of the elite. Called foo lions in the West, these imperial beings represent balance and harmony. A set of two wooden foo lions will be available in the upcoming auction of Asian Works of Art, presented by Hindman. The sculptures come as a pair— a male and a female, each seated on a separate lotus base. One grasps a blossom with its forepaw, while the other is shown scratching its ear. The mouths of both lions are slightly open with their tongues curled upwards.

Paintings and drawings by Chinese artists will also be part of the event. Featured is a hanging scroll from the year 1888, painted by Wu Changshuo, a prominent Chinese painter, calligrapher and seal artist of the Qing dynasty. Titled Bok Choy, the artwork is a stylized illustration of the plant using ink on paper. Also included in the sale are sculptures and collectibles of cultural significance, including statues of Guanyin, blue and white porcelain, and a 12-inch tall Sino-Tibetan figure of Mahakala. Admirers of Asian antiques can explore the entire catalog and register to bid online on Bidsquare.