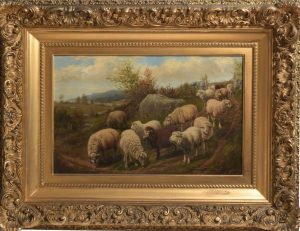 Famed for his wildlife paintings, Arthur Fitzwilliam Tait (1819-1905) was closely associated with the art circles of New York City. Two paintings from the British-American artist will be featured in the upcoming Fall Fine Art, Antiques, and Collectibles auction, presented by Oakridge Auction Gallery. Both paintings draw upon his signature hunting and sporting scenes. A Dry Time, Putnam, NY (1896) is an oil on canvas work that captures a landscape with sheep. The painting is framed in the original giltwood and gesso. The other oil painting is an untitled piece from 1876, depicting a man and boy with four dogs.

The auction also features military collectibles, including a Japanese lacquer arrow case. It is decorated with Toyotomi clan emblems and includes 50 arrows from the Meiji period. Each bamboo arrow is positioned in lacquer cradles. Automobile connoisseurs can consider a large cast aluminum display model of the Irving-Napier Golden Arrow car, which set the World Land Speed Record of 231.352 mph on March 11th, 1929. It was driven by Major Sir Henry Seagrave. This model was reportedly designed for display purposes at automobile shows. To view the complete catalog and register to bid online, visit Bidsquare.