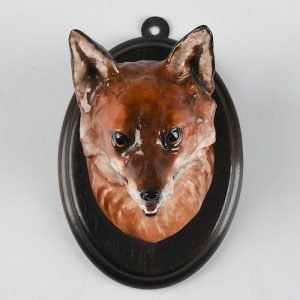 It is 1920, and you’ve decided to watch a racy picture show at the penny arcades. You put your money in and are treated to a flipbook-style show of a fully-clothed woman waking up. Like many lots in the Art, Design, and Collectibles (Part 2) auction presented by Whitley’s, this fully-operational penny arcade offers a glimpse into another time period. While technologies have advanced and definitions of racy have evolved, taking a look at the spectacle of previous generations gives us a better understanding of history.

This auction from Whitley’s is the second half of their Art, Design and Collectibles series, the first part taking place on July 13th. Among the most notable lots in part two is an early 20th-century wooden phone. The piece, made in 1907, includes a button that, in its time, would have connected you to an operator. Another piece with historical significance is the Royal Doulton wall plaque in the shape of a fox. Royal Doulton was an English ceramic manufacturing company that opened in 1815. The brand holds cultural significance to this day, including being prominently featured in Mary Poppins Returns (2018). Whitley’s notes that the fox, originally produced in 1930, is uncommon and few are known to exist.

Another notable piece in this auction is a hand-operated Roller Organ made in the United States in 1890. This model was the standard for organs in the United States from the 1880s to 1920s. Those interested in any of these pieces can view every lot and register to bid on Bidsquare.